Brandon Sehlke, D.D.S., M.S. is a South Texas native and received his bachelor of science degree from Texas Lutheran University. He then graduated as Valedictorian from the University of Texas Health Science Center San Antonio Dental School, receiving his Doctorate of Dental Surgery, followed by specialty training in Periodontics.

Dr.  Sehlke is a diplomate of the American Board of Periodontology; Board Certified in Periodontology and Dental Implant Surgery.

Dr. Sehlke was the recipient of multiple honors while attending UTHSCSA including an Award for Excellence in Clinical Dentistry, Clinical Award for Excellence in Removable Prosthodontics, A.A.P. Dental Student Award for Achievement in Periodontology, and was inducted into Omicron Kappa Upsilon –– the National Dental Honor Fraternity. Dr. Sehlke was also selected as one of the country’s three finalists for the prestigious Dr. and Mrs. Gerald M. Kramer Scholarship for Excellence Award sponsored by the American Academy of Periodontology Foundation.

Dr. Sehlke and his wife, Jennifer, have triplets and reside in the San Antonio area. 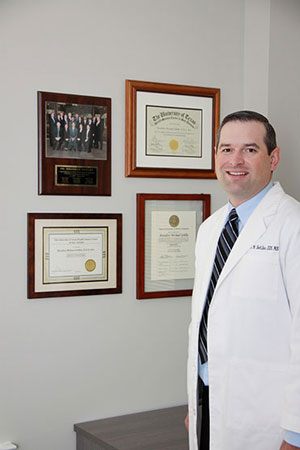